November 02, 2021
1.Which of the following is NOT the property of equipotential surface?
(i) They do not cross each other.
(ii) The rate of change of potential with distance on them is zero.
(iii) For a uniform electric field they are concentric spheres.
(iv) They can be imaginary spheres.
2. Two point charges +8q and -2q are located at x=0 and x=L respectively. The point on x axis at which net electric field is zero due to these charges is-
(i) 8L
(ii) 4L
(iii) 2 L
(iv) L
3. An electric dipole of moment p is placed parallel to the uniform electric field. The amount of work done in rotating the dipole by 900 is-
(i) 2pE
(ii) pE
(iii) pE/2
(iv) Zero
4. Three capacitors 2µF, 3µF and 6µF are joined in series with each other. The equivalent capacitance is-
(i) 1/2µF
(ii) 1µF
(iii) 2µF
(iv) 11µF
5. Two point charges placed in a medium of dielectric constant 5 are at a distance r between them, experience an electrostatic force ‘F’. The electrostatic force between them in vacuum at the same distance r will be-
(i) 5F
(ii) F
(iii) F/2
(iv) F/5
6. Which statement is true for Gauss law-
(i) All the charges whether inside or outside the gaussian surface contribute to the electric flux.
(ii) Electric flux depends upon the geometry of the gaussian surface.
(iii) Gauss theorem can be applied to non-uniform electric field.
(iv) The electric field over the gaussian surface remains continuous and uniform at every point.
7. A capacitor plates are charged by a battery with ‘V’ volts. After charging battery is disconnected and a dielectric slab with dielectric constant ‘K’ is inserted between its plates, the potential across the plates of a capacitor will become
(i) Zero
(ii) V/2
(iii) V/K
(iv) KV
8. The best instrument for accurate measurement of EMF of a cell is-
(i) Potentiometer
(ii) metre bridge
(iii) Voltmeter
(iv) ammeter and voltmeter
9. An electric current is passed through a circuit containing two wires of same material, connected in parallel. If the lengths and radii of the wires are in the ratio of 3:2 and 2:3, then the ratio of the current passing through the wire will be
(i) 2:3
(ii) 3:2
(iii) 8:27
(iv) 27:8
10. By increasing the temperature, the specific resistance of a conductor and a semiconductor-
(i) increases for both.
(ii) decreases for both.
(iii) increases for a conductor and decreases for a semiconductor.
(iv) decreases for a conductor and increases for a semiconductor.
11. We use alloys for making standard resistors because they have
(i) low temperature coefficient of resistivity and high specific resistance
(ii) high temperature coefficient of resistivity and low specific resistance
(iii) low temperature coefficient of resistivity and low specific resistance
(iv) high temperature coefficient of resistivity and high specific resistance
12. A constant voltage is applied between the two ends of a uniform metallic wire, heat ‘H’ is developed in it. If another wire of the same material, double the radius and twice the length as compared to original wire is used then the heat developed in it will be-
(i) H/2
(ii) H
(iii) 2H
(iv) 4H
13. If the potential difference V applied across a conductor is increased to 2V with its temperature kept constant, free electrons in a conductor
(i) remain the same
(ii) become half of its previous value
(iii) be double of its initial value
(iv) become zero.

16. The coil of a moving coil galvanometer is wound over a metal frame in order to

(i) reduce hysteresis
(ii) increase sensitivity
(iii) increase moment of inertia
(iv) provide electromagnetic damping
17. Two wires of the same length are shaped into a square of side 'a' and a circle with radius 'r'. If they carry same current, the ratio of their magnetic moment is
(i) 2 : π
(ii) π : 2
(iii) π : 4
(iv) 4 : π
18. The horizontal component of earth’s magnetic field at a place is √3 times the vertical component. The angle of dip at that place is
(i) π/6
(ii) π/3
(iii) π/4
(iv) 0
19. The small angle between magnetic axis and geographic axis at a place is-
(i) Magnetic meridian
(ii) Geographic meridian
(iii) Magnetic inclination
(iv) Magnetic Declination
20. Two coils are placed close to each other. The mutual inductance of the pair of coils depends upon the
(i) rate at which current change in the two coils
(ii) relative position and orientation of the coils
(iii) rate at which voltage induced across two coils
(iv) currents in the two coils
21. A conducting square loop of side 'L' and resistance 'R' moves in its plane with the uniform velocity 'v' perpendicular to one of its sides. A magnetic induction 'B' constant in time and space pointing perpendicular and into the plane of the loop exists everywhere as shown in the figure. The current induced in the loop is
(i) BLv/R Clockwise
(ii) BLv/R Anticlockwise
(iii) 2BLv/R Anticlockwise
(iv)Zero
22. The magnetic flux linked with the coil (in Weber) is given by theequation – Փ = 5t2 + 3t + 16 The induced EMF in the coil at time, t=4 will be-
(i) -27 V
(ii) -43 V
(iii) -108 V
(iv) 210 V
23. Which of the following graphs represent the variation of current(I) with frequency (f) in an AC circuit containing a pure capacitor?

24. A 20 volt AC is applied to a circuit consisting of a resistance and a coil with negligible resistance. If the voltage across the resistance is 12 volt, the voltage across the coil is-
(i) 16 V
(ii) 10 V
(iii) 8 V
(iv) 6 V
25. The instantaneous values of emf and the current in a series ac circuit are- E = Eo Sin ωt and I= Io sin( ωt+π/3) respectively, then it is
(i) Necessarily a RL circuit
(ii) Necessarily a RC circuit
(iii)Necessarily a LCR circuit
(iv) Can be RC or LCR circuit
26. A cylinder of radius r and length l is placed in an uniform electric field parallel to the axis of the cylinder. The total flux for the surface of the cylinder is given by-
(i) zero
(ii) π `"r"^{2}`
(iii) E π `"r"^{2}`
(iv) )2 Eπ `"r"^{2}`
27. Two parallel large thin metal sheets have equal surface densities 26.4x10-12 C/m2 of opposite signs. The electric field between these sheets is-
(i) 1.5N/C
(ii) 1.5 x `10^{-16}` N/C
(iii) 3 x `10^{-10}`N/C
(iv) 3N/C
28. Consider an uncharged conducting sphere. A positive point charge is placed outside the sphere. The net charge on the sphere is then,
(i) negative and uniformly distributed over the surface of sphere
(ii) positive and uniformly distributed over the surface of sphere
(iii) negative and appears at a point the surface of sphere closest to point charge.
(iv) Zero
29. Three Charges 2q, -q and -q lie at vertices of a triangle. The value of E and V at centroid of triangle will be-
(i) E#0 and V#0
(ii) E=0 and V=0
(iii) E#0 and V=0
(iv) E=0 and V#0
30. Two parallel plate capacitors X and Y, have the same area of plates and same separation between plates. X has air and Y with dielectric of constant 2 , between its plates. They are connected in series to a battery of 12 V. The ratio of electrostatic energy stored in X and Y is-
(i) 4:1
(ii) 1:4
(iii) 2:1
(iv) 1:2
31. Which among the following, is not a cause for power loss in a transformer-
(i) Eddy currents are produced in the soft iron core of a transformer.
(ii) Electric Flux sharing is not properly done in primary and secondary coils.
(iii) Humming sound produed in the tranformers due to magnetostriction.
(iv) Primary coil is made up of a very thick copper wire.
32. An alternating voltage source of variable angular frequency ‘w’ and fixed amplitude ‘V’ is connected in series with a capacitance C and electric bulb of resistance R(inductance zero). When ‘w’ is increased-
(i) The bulb glows dimmer.
(ii) The bulb glows brighter.
(iii) Net impedance of the circuit remains unchanged.
(iv) Total impedance of the circuit increases.
33. A solid spherical conductor has charge +Q and radius R. It is surrounded by a solid spherical shell with charge -Q, innerradius 2R, and outer radius 3R. Which of the following statements is true? 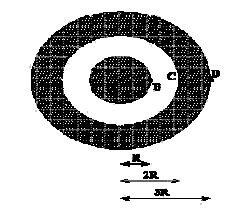 (i) 1V
(ii) 2V
(iii) 3V
(iv) 4V
36. A straight line plot showing the terminal potential difference (V) of a cell as a function of current (I) drawn from it, is internal resistance of the cell would be then 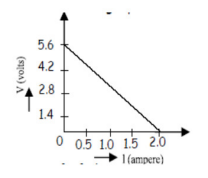 39. Three infinitely long parallel straight current carrying wires A, B and C are kept at equal distance from each other as shown in the figure . The wire C experiences net force F .The net force on wire C, when the current in wire A is reversed will be 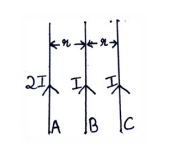 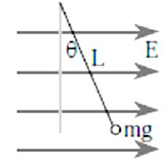 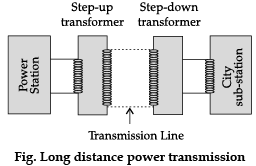 The large-scale transmission and distribution of electrical energy over long distances is done with the use of transformers. The voltage output of the generator is stepped-up. It is then transmitted over long distances to an area sub-station near the consumers. There the voltage is stepped down. It is further stepped down at distributing sub-stations and utility poles before a power supply of 240 V reaches our homes.
52. Which of the following statement is true?
(i) Energy is created when a transformer steps up the voltage
(ii) A transformer is designed to convert an AC voltage to DC voltage
(iii) Step–up transformer increases the power for transmission
(iv) Step–down transformer decreases the AC voltage