Section A
Very Short Answer Questions
How did the Non-Cooperation Movement unfold in the cities and towns of India?

Why is tourism considered as a trade?

Differentiate between one party and two party system.

State the role of Reserve Bank of India.

Read the data in the table given below and answer the questions that follow:

Total production of finished steel in India
Read the data in the table given below and answer the questions that follow:

Section B
Short Answer Type Questions
Why do most of the rural households still remain dependent on the informal sources of credit? Explain.

How do Self Help Groups help borrowers to overcome the problem of lack of collateral? Explain

“Tribal peasants interpreted the message of Mahatma Gandhi and the idea of swaraj in another way and participated in the Non-Cooperation Movement differently.” Justify the statement.

Examine the role of Political Parties in a democratic country.

Section C
Long Answer type Questions
Democracy’s ability to generate its own support is itself an outcome that cannot be ignored.’ Support the statement with examples.

‘There is an overwhelming support for the idea of democracy in South Asia.’ Support the statement with examples.

Examine the role of Information Technology in stimulating the process of globalization.

Assess the impact of globalization on India and its people.

Section D
Case Based Type Questions
Read the given text and answer the following questions:

‘It is said of “passive resistance” that it is the weapon of the weak, but the power which is the subject of this article can be used only by the strong. This power is not passive resistance; indeed, it calls for intense activity. The movement in South Africa was not passive but active … ‘Satyagraha is not physical force. A satyagrahi does not inflict pain on the adversary; he does not seek his destruction … In the use of satyagraha, there is no ill-will whatever. ‘Satyagraha is pure soul-force. Truth is the very substance of the soul. That is why this force is called satyagraha. The soul is informed with knowledge. In it burns the flame of love. … Nonviolence is the supreme dharma …‘It is certain that India cannot rival Britain or Europe in force of arms. The British worship the war-god and they can all of them become, as they are becoming, bearers of arms. The hundreds of millions in India can never carry arms. They have made the religion of non-violence their own ...’
Why did Gandhiji consider nonviolence as supreme dharma?

How was Gandhian satyagraha taken by the people who believed in his philosophy?

Why was Gandhian satyagraha considered as a novel way to resist injustice?

Read the given text and answer the following questions:

Ever since humans appeared on the earth, they have used different means of communication. But, the pace of change, has been rapid in modern times. Long distance communication is far easier without physical movement of the communicator or receiver. Personal communication and mass communication including television, radio, press, films, etc. are the major means of communication in the country. The Indian postal network is the largest in the world. It handles parcels as well as personal written communications. Cards and envelopes are considered first-class mail and are airlifted between stations covering both land and air. The second-class mail includes book packets, registered newspapers and periodicals. They are carried by surface mail, covering land and water transport. To facilitate quick delivery of mails in large towns and cities, six mail channels have been introduced recently. They are called Rajdhani Channel, Metro Channel, Green Channel, Business Channel, Bulk Mail Channel and Periodical Channel.
Examine the role of the Indian postal network.

Analyse the significance of communication for a nation.

Section E
Map Skill Based Question
On the given outline Political Map of India, identify the place marked as A with the help of following information and write its correct name on the line marked near it.

(A)The place where Non Cooperation Movement was called off due to violence.

On the same given map of India, locate the following:

On the same given map of India, locate the following:

Note: The following question is for Visually Impaired Candidates only in lieu of Q. No.13.1

Note: The following questions are for Visually Impaired Candidates only in lieu of Q. No.13.2. Attempt ANY TWO questions. 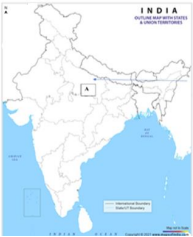